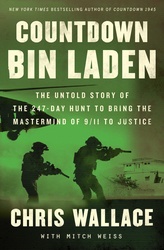 Countdown bin Laden: The Untold Story Of The 247-Day Hunt To Bring The Mastermind Of 9/11 To Justice

In Countdown bin Laden, anchor of Fox News Sunday Chris Wallace delivers a thrilling account of the final eight months of intelligence gathering, national security strategizing, and meticulous military planning that led to the climactic mission when SEAL Team Six closed in on Osama bin Laden. This revelatory book delivers new information collected from Wallace’s in-depth interviews with more than a dozen central figures, including two members of SEAL Team Six who participated in the raid.

Countdown bin Laden is a historical thriller filled with intrigue, cinematic action, and fresh reporting about the race to apprehend and bring to justice the mastermind of the most consequential terrorist attack in American history.