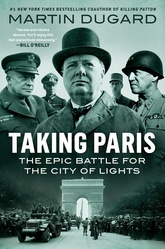 Taking Paris: The Epic Battle Of The City Of Lights

Saving the City of Lights

May 1940: The world is stunned as Hitler's forces invade France with a devastating blitzkrieg aimed at Paris. Within weeks, the French government has collapsed, and Paris has fallen under Nazi control.

As the Germans ruthlessly crush all opposition, a patriotic band of Parisians, known as the Resistance, secretly rise up to fight back. But these young men and women cannot do it alone. When the armies of America and Great Britain prepare to launch the greatest invasion in history, the spies of the Resistance risk all to ensure the Germans are defeated and Paris is once again free.

Taking Paris is history told at a breathtaking pace, a sprawling yet intimate saga of heroism, desire, and personal sacrifice for all that is right.