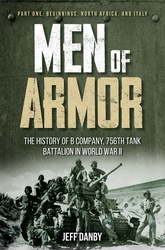 Men Of Armor: The History Of B Company, 756th Tank Battalion In World War II, Part One

Rolling through the gates of hell

After the fall of France in June 1940, the U.S. Army embarked on a program to establish a new armored force. One of the units formed was the 756th Tank Battalion (Light). While companies A and C took part in Operation Torch, B joined the battalion two months later in North Africa. In December 1943, the battalion was ordered to upgrade to a medium tank (Sherman) unit. Given less than a month to reorganize and train, the battalion was sent into Italy's Mignano Gap.

This thrilling first volume of B Company's history covers its battles in North Africa and Italy. Based on decades of research, and extensive interviews with veterans, Jeff Danby's vivid narrative puts the reader in the turret of B Company's Shermans as they ride into battle.