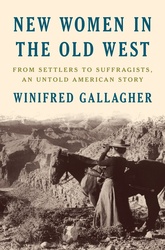 New Women In The Old West: From Settlers To Suffragists, An Untold American Story

The epic lives of pioneering women

In New Women in the Old West, author Winifred Gallagher brings to life the little known and under-reported women who played monumental roles in one of the most vibrant and transformative periods in US history.

Alongside their victories, Gallagher explores the women who were less privileged by race and class, the Native American, Hispanic, African-American, and Asian women, yet joined the fight for universal equality. Drawing on an extraordinary collection of research, including personal letters and diaries, Gallagher weaves together the striking achievements of those who not only created homes on weather-wracked prairies and built communities in muddy mining camps, but played a crucial, unrecognized role in the women's rights movement.