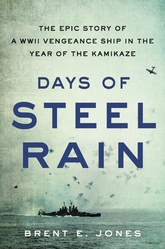 Days Of Steel Rain: The Epic Story Of A WWII Vengeance Ship In The Year Of The Kamikaze

Sprawling across the Pacific, this untold story follows the crew of the newly-built "vengeance ship" USS Astoria. At its center is the U.S. Navy Captain George Dyer, who vowed to return to action after suffering a horrific wound. He accepted the ship's command in 1944, knowing it would be his last chance to avenge his injuries and salvage his career.

Days of Steel Rain brings to life more than a decade of research, depicting with unprecedented insight the singular drama of a captain grappling with an untested crew and men who had endured some of the most brutal fighting of World War II. Throughout, author Brent Jones fills the narrative with secret diaries, memoirs, letters, and the innermost thoughts of the Astoria men.