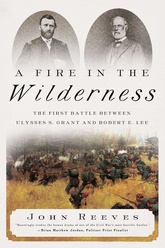 A Fire In The Wilderness: The First Battle Between Ulysses S. Grant And Robert E. Lee

Grant and Lee face off for the first time

In the spring of 1864, President Lincoln feared that he might not be able to save the Union. The Army of the Potomac had performed poorly over the previous two years. Lincoln assumed he’d lose the November election, and he firmly believed a Democratic successor would seek peace immediately, spelling an end to the Union. A Fire in the Wilderness tells the story of that perilous time when the future of the United States depended on the Union Army’s success in a desolate forest roughly sixty-five miles from the nation’s capital.

In this riveting account of the first bloody showdown between Ulysses S. Grant and Robert E. Lee, author John Reeves takes readers inside a bloody battle that changed the course of American history.