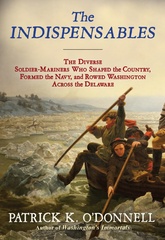 The Indispensables: Marblehead's Diverse Soldier-Mariners Who Shaped The Country, Formed The Navy, And Rowed Washington Across

On August 29, 1776, the Continental Army faced capture or annihilation after losing the Battle of Brooklyn. The British had trapped George Washington’s forces against the East River, and the fate of the Revolution depended on the soldier-mariners from Marblehead, Massachusetts. Serving side by side in one of the country’s first diverse units, they saved the army by transporting it across the treacherous waters of the river to Manhattan.

White, Black, Hispanic, and Native American, this group of soldiers set an inclusive standard of unity the US Army would not reach again for more than 170 years. The Marbleheaders’ chronicle, never fully told before now, makes The Indispensables a vital addition to the literature of the American Revolution.