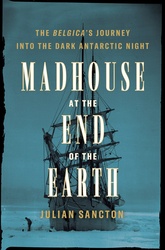 Madhouse At The End Of The Earth: The Belgica's Journey Into The Antarctic Night

A chilling tale of horror and survival

In this harrowing account of a polar expedition that went terribly awry, author Julian Sancton delivers a thrilling true story of adventure and terror for the ages.

In August 1897, the young Belgian commandant Adrien de Gerlache set sail for Antarctica aboard the ship Belgica. After a series of setbacks, his ship became frozen in the icy sea and his crewmates were condemned to months of endless night. In the darkness, some men died horrible deaths, while others descended into madness.

Drawing on the journals of the Belgica’s crew and with exclusive access to the ship’s logbook, Sancton brings novelistic flair to a story of human extremes, one so remarkable that even today NASA studies it for research on isolation for future missions to Mars.