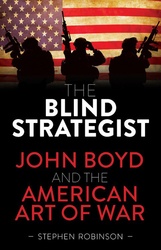 The Blind Strategist: John Boyd And The American Art Of War

Corrupting the art of war

Colonel John Boyd (1927–1997), a maverick fighter pilot, revolutionized the American art of war. Boyd claimed that victory is won by the side that most quickly transitions through "decision cycles." From this revelation came maneuver warfare theory, a new warfighting creed that gained influential converts in the Pentagon.

In this detailed account, historian Stephen Robinson evaluates the maneuver warfare revolution that transformed the American military. Maneuver warfare has since been credited with many military victories, but such claims have little basis in reality and Boyd’s legacy has accidentally undermined American security. Robinson exposes the fraudulent accounts behind Boyd’s research and the controversy surrounding them.