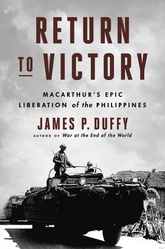 Return To Victory: MacArthur's Epic Liberation Of The Philippines

Covering both the strategic and tactical aspects of the campaign through the participation of its soldiers, sailors, and airmen, as well as its commanders, James P. Duffy leads readers through a vivid account of the nearly year-long, bloody campaign to defeat over a quarter million die-hard Japanese defenders in the Pacific theater.