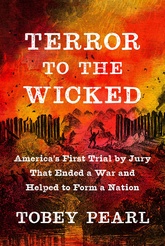 Terror To The Wicked: America's First Trial By Jury That Ended A War And Helped To Form A Nation

The year: 1638. The setting: Providence, Plymouth Colony. A young Nipmuc tribesman is fatally stabbed near Plymouth Colony by a white runaway servant and fellow rogues. Fighting for his life, the tribesman is able with his final breaths to reveal the details of the attack to Providence’s governor, Roger Williams. A frantic manhunt by the fledgling government ensues, followed by the first murder trial in U.S. history.

Piecing together a fascinating narrative through original research and first-rate detective work, Tobey Pearl re-creates in detail this startling, pivotal moment in pre-revolutionary America, as she examines the evolution of our nascent civil liberties and the role of the jury as a safeguard against injustice.