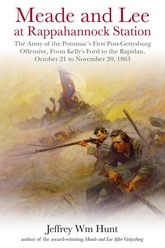 Meade And Lee At Rappahannock Station: The Army Of The Potomac's First Post-Gettysburg Offensive, From Kelly's Ford To The Rapi

In the aftermath of Gettysburg

Contrary to popular belief, the Eastern Theater during the late summer and fall of 1863 was anything but inconsequential. Generals George Meade and Robert E. Lee continued to boldly maneuver the chess pieces of war. This period was the first and only time Meade exercised control of the Army of the Potomac on his own terms, but historians have all but ignored it. Jeffrey Wm Hunt brilliantly rectifies this oversight in Meade and Lee at Rappahannock Station.

This third installment in Hunt’s Meade and Lee series is grounded upon official reports, regimental histories, letters, and other archival sources. Together, they provide a day-by-day account of the Union army’s first post-Gettysburg offensive action and Lee’s efforts to repel it.